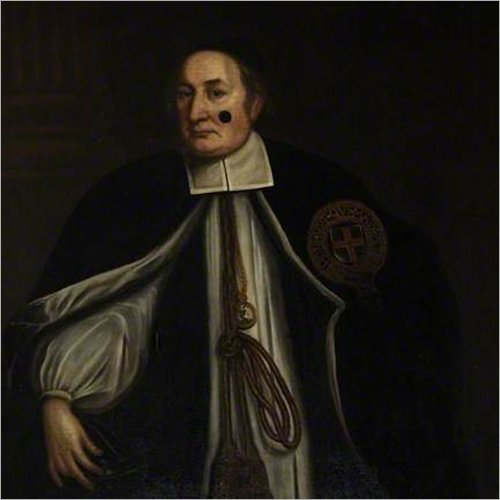 This early 18th century portrait is housed within The Bishop’s Palace, Wells. This particular portrait is the oldest and most significant painting within the Ship’s Palace collection. It plays a crucial role in helping to interpret 800 years of social, political and religious history and bringing the Palace alive for over 40,000 visitors every year.

The portrait also informs the Palace’s Learning & community programme, which relies on the fascinating stories behind each item in the collection.

The painter of the Bishop Peter Mews portrait is unknown. It is believed to be from the British School of artists, perhaps after Michael Dahl (1659-1743).

The black patch on Bishop Mews’ face quickly attracts the attention of visitors and he has been given two nicknames; ‘Old Patch’ or ‘The Bombardier Bishop’. The patch covers the scar that he received whilst fighting for King Charles 1 in the Civil War. A flamboyant character, he left Wells to become Bishop of Winchester in 1685, just before the Duke of Monmouth invated South-West England in an attempt to seize the throne from King James II.

The work was first examined for conservation in February 2008 and the following observations were made at that time.

The portrait had been previously lined, and the old glue paste lining was in poor condition and failing to secure an unstable paint layer. The original tacking margins had been lost and the degraded and brittle lining canvas was only poorly secured to the stretcher.

The painting exhibited a dense craquelure with pronounced ‘cupping’ throughout large passages of the composition and the paint layer was unstable and beginning to flake. There was clear evidence of earlier fragmentary paint loss where the historic restoration had been poorly executed over exposed canvas; there being no filling or ground layer applied before retouching.

In particular, an old ‘I’ shaped tear to the centre left of the composition had been poorly restored with a canvas patch visible to the reverse. There were numerous old retouchings which had reduced and darkened in tone and these were especially conspicuous through the face of the Bishop.

Additional work was also required to the frame which was in a poor condition.

The painting was awarded £2,400 by the Woodmansterne Art Conservation panel of judges, allowing extensive conservation work to be undertaken on all of the above and it was refitted to the frame for return to the Bishop’s Palace.